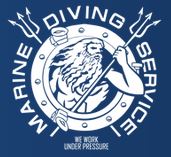 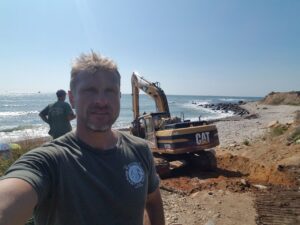 A Little Taste of History by Cpt. Diver Zdenek Ulman

I’m feeling quite tired and cold after 2 days of working on the crane salvage.

I quickly loaded all the equipment onto the tug boat, and off we go. The big monster tug starts pushing the attached barge as monster crane is raising the spuds. The last one is out and we are moving. Heading to another place to remove an old tug boat engine, introduced as a “simple task”. I decided to use my large 120cu ft. tank just in case. After about half an hour we arrived and heard the crane start-up and drop the spuds to bring the barge to a complete stop. Here it is –white PVC marker supposedly to beset right at the spot of the engine resting point. Ok tank goes on,mask, gloves, light is on, fins and… splash. A quick descent and the first search circle in about 20 ft. of water. There’s nothing other than murky cold Long Island Sound water. I came up and signaled for thesearch line and got about 60 ft. of line. Down again. Securing the line of the PVC marker anchor and starting my expanding search circles. It’s a relaxing dive, hovering over the sandy bottom, I find myself enjoying the swim. I can see the sun until I go to the area where the barge is shading all the light as I swim underneath it.

A few circles done and I’m at about half the length of the line. Having first doubts about the location. Well, the dive is enjoyable.

Almost at the end, I’m scanning for anything out of the ordinary, checking sand for any debris. Nothing yet. The line almost ends as I have 2 feet left. Here I start to see some debris-possibly wood as I’m completing my last circle. Tying the line to the biggest piece and hovering around all of a sudden, I see a dark spot. It looks like a huge wall. I swim about 10 feet towards it, and my eyes are staring at the giant block-It is the engine.

I swim around having some doubts if this is truly the engine. It has been here since about 1950 and so heavily covered with marine life that I can barely see the shape. As I’m getting on top of it, I can see now what I assume is the exhaust manifold. I carefully circle around many times to inspect it, checking with my hands if I can somehow get underneath it to install the rigging for the crane pick-up. There is no way to go underneath, it is at least 4 feet wide at the bottom with no space. It takes me about half an hour to decide my rigging plan. Watching my pressure gauge, I have about half a tank so I come up and give a signal to hoist steel cables on top of the engine. Taking another dive down with a second diver to confirm the attached plan. I took the battle with heavy steel cables trying to bring them under each side of the engine, bend them somehow, and come up around to the hooks. I’m huffing and puffing, one side is done, checking my air gauge, and going to the other side. It is more difficult here since the cable goes only 2 inches under the edge. I feel like I’m in a wrestling ring, bending that steel monster, and trying to put it to the hook atop the engine, the cable is short. I made it after several attempts. Taking the last swim around, and coming up. The crane is in my sight and I see a few faces, awaiting some signal from me. I feel relief, floating on top of the water, raising my hand, and giving the crane signal to lift it up. It is a moment of joy and accomplishment. I’m finally getting all those piercing eyes off me and I can see relief from everyone on the barge. I swim aside, and little by little the sea monster is coming up. It is like awakening an ancient world and bringing it to light among us. It is really big, the crane sets in on the deck of the barge, and I take a swim to the tug boat to get out of my gear.

Almost an hour and half later, another job is done. This time with a little taste of history.

Don’t miss Diver Z at this years´ Riverfest! He will be performing diving demonstrations at the @thesciencebarge Environmental Section. He has been a salvage diver and captain in the New York area for the past 5 years. Come and chat with him about what he’s found in the river. 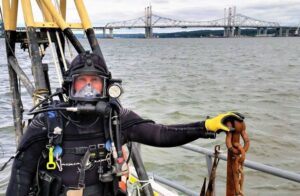 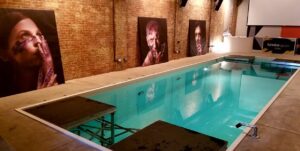 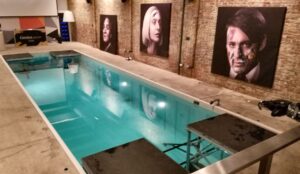 Remains of Tug Boat “Kevin B”

Back in 1954, the wooden tugboat caught fire. The Coast Guard ran it aground and let it burn to the water line. Over the years Kevin B’s propeller and portholes were salvaged. Eventually, all that was left was its 4,000 lb, 15 ft long engine block, which was barely visible at low tide. MORE INFO and a newspaper article HERE 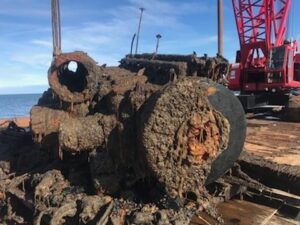 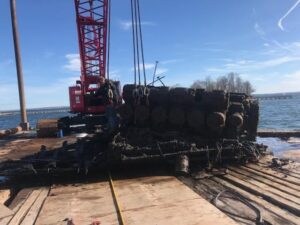 Marine Diving Service was invited to the Water Day event to Perform a dive demo for the public, along with an equipment presentation. Thanks to our friend from Baylander Scot Koen. 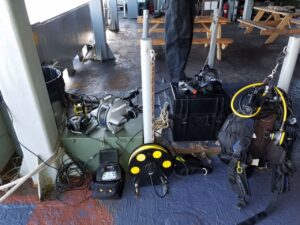 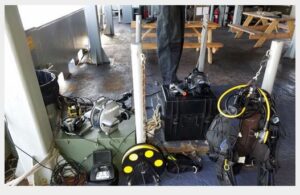 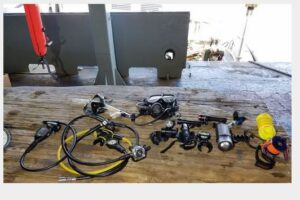 Was hired to assist with rigging and recovery of the sunken crane. On March 20/2018 water temperature was in the low 30, our dive team was equipped with dry suits and an underwater wireless communication system. We used our cordless underwater cutting tools as well as ROV for the after-recovery bottom survey. 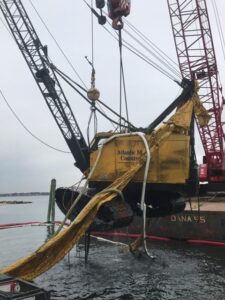 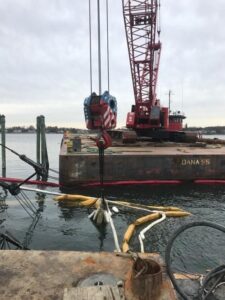